You are here: Home / Stories / Teachers Benefit from CAP 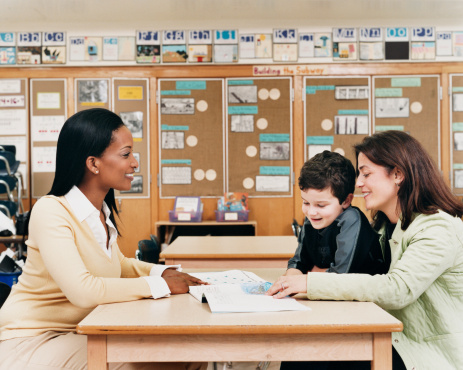 “This program opens new doors to my students. For the first time, I feel like I can talk to them about a subject that was more or less taboo before CAP.”

“Forever impressed on my mind will be the little face of ‘Mark’, a nine year old boy who sat very still during the Uncle role-play. Tears cascaded down his cheeks. Although he did not disclose anything during review time a process was begun with the teachers at school to watch him carefully. I watched him closely during the classroom role-plays and felt like I was seeing a reflection of myself at nine years old. For a few seconds, I longed that someone had shown me what Mark’s eyes saw and told me what Mark’s ears heard. I believe his life will be different somehow because he heard the CAP message.”

While presenting a staff workshop, one of the teachers wrote the following on the back of the evaluation: “Very helpful and useful, unexpected childhood memories of being a rape survivor were so vivid throughout your presentation. I needed to relearn how not to react to a child informing me about a not so safe situation. And not allow my reactions to my own experience scare them or make them shut down. I am eager to go on your website to learn more about your program Thank you so much.”

While working in a school, a CAP Facilitator was approached by one of the school’s teachers. The teacher explained to the facilitator that she had been a student at this school and now works here. She remembered the CAP program as a student. She was able to recall her rights and the CAP yell. She thanked us for providing her with strategies and was thrilled the school continues to bring the program to their students each year.

In a school where CAP has been implemented for many years, a principal, who has decided to return to teaching, told the CAP Presenter that she is a staunch supporter of CAP. She then shared that she believes that all schools should have the CAP program and that wherever she decides to teach, she will advocate for CAP because she believes that all children, including her own, deserve to be Safe, Strong and Free.

After an adult workshop, an attendee shared her heartfelt story about the CAP Program. She told the others that she had the CAP program when she was a student in middle school. She went on to say how thankful she was for the knowledge she learned about sexual harassment. She was experiencing it but didn’t know how to handle it. After she used the strategies from the CAP program, and told the boy she wanted him to stop, she felt so empowered. She was truly thankful for our program.

At the conclusion of an Elementary staff in-service, a staff member approached a CAP facilitator to share the following story. The teacher had previously worked in another district that had the CAP program. A day or so after the program a child in her class came to talk with her. She told the teacher she did not feel safe with her grandfather. The child disclosed that her grandfather played a game with her that she did not like. He called it bouncing on ‘balls’.
As the story unfolded the child spoke about inappropriate touching during this game with her grandfather. A call was placed to SCR and a DCPP report/investigation ensued. The child was removed from the home and placed in foster care. The child developed a wonderful relationship with her foster family and is flourishing in her new environment. The teacher keeps in touch with the child and spoke of this situation as a life changing moment for her. She knows the child came forward to her as a direct result of having had the CAP workshop in school.

After a staff adult workshop, a teacher who attended spoke with the CAP Presenter to tell them how wonderful and informative the workshop was. She told the presenter that her child attended a school in another district and would love it if the program could be implemented at her son’s school to teach the empowering message of children have the right to be Safe, Strong and Free. After a few weeks, the county coordinator received a phone call from the school asking if the program could be implemented. The superintendent had heard the teacher describe the Teen CAP program so enthusiastically, explaining what she had learned and was interested in having the program. After the Teen CAP workshops were completed, the feedback was so positive that they wanted to offer the full program district wide.

NJ CAP is a RTC of the International Center for Assault Prevention. It partners with state, national and worldwide prevention advocates.